To wear dreams on one's feet is to begin to give a reality to one's dreams... Roger Vivier

There is a saying- “Wars may be fought with weapons, but they are won by men.” Since the dawn of time men were in the battlefield, fighting for our nation and protecting us. So it is our responsibility to take a step towards the safety of our fighting heroes. There are many serious injuries that occur in the battle field. Ankle sprains are a common orthopedic injury in military populations and due to this the need and demand for combat boots and safety shoes are higher.
Warrior, from the house of Liberty is a leading manufacturer of safety footwear in India as well as supplier of safety shoes and combat boot across different parts of the world like Malaysia, Qatar, Singapore etc to name a few.
Why choose combat boots?
Combat boot and safety footwear are built and designed to protect your feet under extreme stress. So before stepping out in the battlefield make sure that your feet are safe because a safe warrior can make our nation safe.
Some of the key points to focus on the use of combat boots are mentioned below-

In general, these boots are durable and very reliable and these combat boots are close to necessities for any military and even non-military purpose. 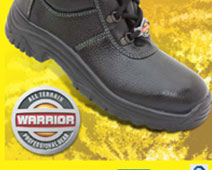 Manufactured to meet safety norms, Warrior is robust and reliable.

Approved by reputed laboratories from world over, such as F.D.D.I (India) and P.F.I (Germany)... 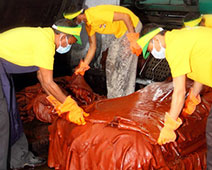 We only use the finest and genuine leather for all our products...

Inhouse testing lab with more than 73 testing machines and equipments which assures...